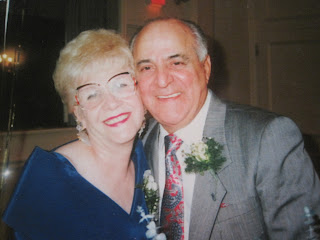 Aunty and Uncle D on their 50th Wedding Anniversary
November 1, 1992
Today, November 1, 2012 would have been the 70th wedding anniversary for my late Aunty and Uncle D. They were married on All Saint's Day 1942!
One of the greatest nights of my life was the surprise party that we gave them for their fiftieth anniversay. It took over a year to plan and was worth all the time and money.
If you are considering throwing a party for someone you love...I encourage you to take the plunge. If someone you love deserves a party....go out and make it happen. And always trust your instincts. I knew my Uncle would appreciate it if his long time neighbors were there. Some of the others weren't convinced. I pleaded and plotted until the "people on our street" made the list. My Uncle would later say how much it meant to "Turn around and see Carol-Anne, Rico, and Sammy there!" 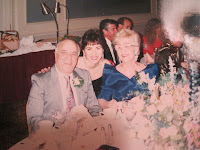 Twenty years later I still feel enormous pride and joy when I think of how happy my humble aunt and uncle were when they walked into the room and stood before a standing ovation of love. Aunty and Uncle D were always smiling but this night they were actually beaming with bliss!
It's fitting that they were married on The Feast of the Saints. One definition of a Saint is: One who lets the light of God shine through them...
Having these two people by my side for most of my life has made me the luckiest person in the world. Their love was so strong and lasting that even now, I have so much of it that I can share some with YOU and still have an abundance left. My hope is that you will share this LOVE that I send along with what you already have inside and go out and bestow it on someone you love.
Little by little we can light up the world....Eternally....
And making the world a little lighter might even be good for climate change!
Aunty and Uncle D helped save my life with their love...now they might even save yours.
Posted by Renee Gold at 8:19 PM

How wonderful! I will like someone to throw a party for me , provided I can make a 50th anniversary. We only live once, so live well and happy! Great memories!

You definitely know how to make your loved ones happy and blissful. You have created many little lights that night. I hope that the light can shine brightly to your blog readers. It certainly has for me. As the song goes 'you light up my life'.