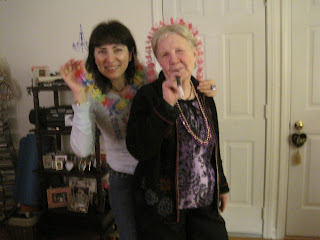 87 years ago today, my favorite person was born....my Great Aunty Helen. For me, March 7th will always be a holiday. Aunty is one selfless and profoundly loving person. She has been by my side every day of my life. Everyone she touches is blessed.

What does one do on their 87th birthday… well, if you are Aunty, you might start celebrating the day before. Yesterday, we kicked off the day with some Stevie Wonder Moments, for us that involved plying some of Stevie’s clssic songs, like Aunty’s fvorite, I just Clled to Sy I Love You, nd Isn’t She Lovely, while Aunty bsked in tight hugs from her niece, rrnged her birthdy crds, nd I felt pure, rw moments of love with ech bet.

I must have cried three different times yesterday, tears of happy joy, just to see Aunty, first of all, alive, second, happy, and third, healthy enough to dance and sing.

The day only got better as her best friend, Gracie came a calling. Gracie adores Aunty almost as much as I do. We greeted Gracie at the door while we had Tommy Dorsey’s Greatest Hits CD, playing Opus One. After some jitterbugging, the three of us formed a prayer circle and asked the Dear Lord to continue blessing our amazing Aunty. 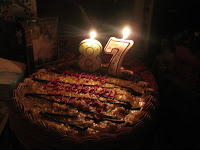 Gracie took Aunty out for their “routine,” which means playing cards at McDonald's and sipping Green Mountain Coffee, then carousing around a store called Building 19 ½, while Aunty entertains everyone; shoppers, old friends, and workers alike.
Later Gracie treated us to a Mediterranean Platter, and Whole Wheat Pizza at California Pizza Kitchen. Aunty sat there beaming in the booth, as the 23 year old waiter flirted with her. When he walked away with our order, she asked me if she had on enough lipstick, while she spritzed her perfume.
Back at the house, I served Aunty and Grace, Godiva Crème Brule Coffee (aunty’s favorite drink on the planet is coffee) and then the party started. A few friends, along with my mother and her sister, came over to share aunty’s day. We danced, sang, hugged, ate German Chocolate Cake, and sipped a wine so good I will be blogging about it soon. But, the best part was the party girl herself. Aunty was genuinely happy. She thanked everyone over and over again for coming. The pleasure was all ours. The people in attendance were old enough to know that, a sure way to feel good is to make someone happy.

Today, Gracie called to say, “I went to bed glowing last night.” And my mom’s sister, Aunty Joan, who’s been a bit depressed lately, called to say… “Aunty Helen is going to outlive us all. She’s a hot-ticket. She’s helping me regain my spirit for living.”

When Aunty woke up this morning, she continued carrying on about her new friend Scottie, who happens to be a good looking 43 year old man who truly enjoys chatting with Aunty. I knew exactly who she meant when she asked, “What was his name again?” Then, after her usual breakfast of whole grains, flaxseed, blueberries and organic yogurt, she stepped outside to the waiting van (the ride to her day program) and she was greeted by another handsome, young man, who was holding a rose for her.

I can see it now, at the vivacious rate she’s going, for her 90th birthday, we’ll have a house filled with roses, suitors at the door, and an invitation to fly to the moon with Tony Bennett. Anything is possible with Ageless Aunty… 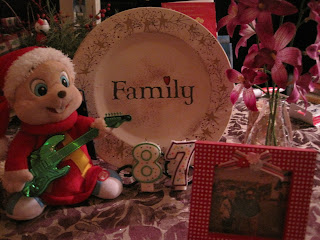 Remnants of an 87th Birthday Party
Posted by Renee Gold at 12:00 PM

Glad to hear it was a wonderful day. Please send her my love.