A LOVE BIGGER THAN THE SKY! 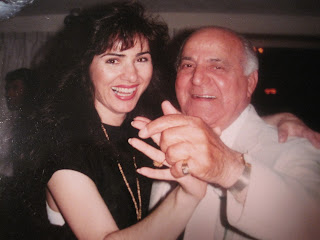 But there was one man who was so easy to live with, it's really hard to live without him! This is a man who was so perfectly wonderful that I never wanted to leave him, not even for a second. And I never did. He never left me either. Every single day of my life he was right by my side. I am talking about the man who raised me since birth with selfless love, along with his wife “Aunty," my late great Uncle Domenic. Uncle D! 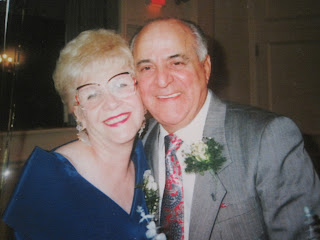 Today marks the 18 year anniversary of his passing. Born May 17, 1919 and passed April 25, 2004. He was 88 years old when he crossed over, with his entire family by his side. This was a man who brought me blue-popsicles the color of the sky that miraculously never melted. My love for him is bigger than that sky!

He bought me EVERYTHING, including shoes, and clothes, and countless Barbie Dolls, and two Easy Bake Ovens. Uncle D loved music so much, he sang in a group, the Roman Rambles, when he was young. He also was an ace at playing the spoons. He gave me a juke-box full of music when I was only five, and took me to see the Beatles when I was eight!  This is a man who was so loving and caring, a big hearted sentimental guy who was so loved and appreciated in his community, that they put a sign in his name to honor him at the end of his street. The street that I lived on with Aunty and Uncle D, for most of my life - Thorndike St.  Uncle D was born on 52 Thorndike Street in Revere, and never left. With the exception of my wedding and his honeymoon, he slept at home, on Thorndike Street, every night of his long life!

Ever since his passing I have said, Uncle D, you will always be with me. On my part, and his, a love this pure and real can never ever die. Thankfully its eternal and I am still comforted by it. I really am. They raised me with the love of Christ, The generosity of Santa Claus, and the Compassion of Buddha. (That is a wholehearted line from my upcoming, at some point, book.)

Thank you Aunty and Uncle D….My angels in the popsicle-blue sky watching over me today, tomorrow, and forever more….along with my mothers love and compassion, you are the best part of me.

Today is also the birthday of my Godfather and late Uncle Bob. “Uncle” was so well loved by all. And he made me feel extra special, always having an interest in what I was doing, and always and forever teasing me about something. Uncle took us all for rides and to the Drive-in with his cool red convertible. And whenever we visited him he gave us candy, dimes, and played Dionne Warrick.

I love you Unk….and I will write more about you soon. Happy Birthday. Like one of your favorite songs, I will say a little prayer for you! And like the rest of my family, Uncle D loved Uncle Bob too! They had a close bond. Uncle D was always there and watching out for him, watching out for all of us! Amen.

Dear Uncles, you will never be forgotten.

Posted by Renee Gold at 5:39 AM No comments: