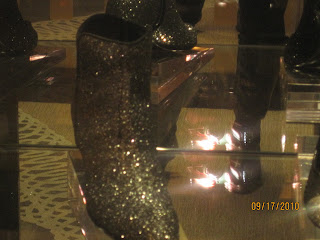 I found the perfect pair of shoes to go with all the good energy showing up in my life these days.
What do you think? I just love them! They are modern day Ruby/Glass Slippers. They remind me of moonbeams, wizards, and fairy tales. They will light the way! One could certainly walk to fame and discover new frontiers in these. I bet Oprah has a pair in multi-colored diamonds.
Now, if I could only afford them. Something tells me they might be a Louboutin or Giuseppe Zanotti. These distinctive, silver showstoppers are now appearing in the lobby of the Mandarin Oriental Hotel in Boston, locked in a glass case. Let’s guess the price (without looking). I will post the answer as soon as I find out.
I will add these intergalactic go-go boots to my Christmas wish list. What’s on yours… 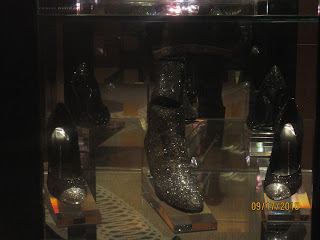 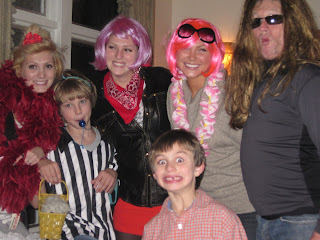 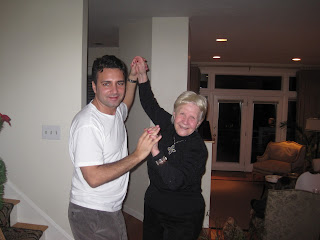 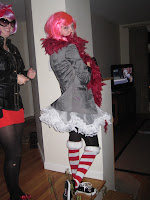 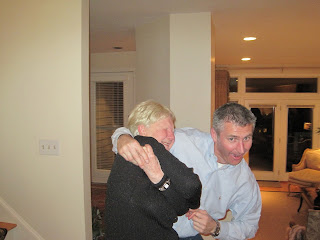 in mid turn
Ho Ho Ho…Happy Holidays to all. My favorite time of the year is here!
Posted by Renee Gold at 1:01 PM 2 comments: 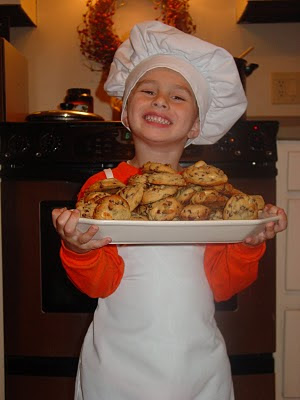 Take a day off the weight watching and just enjoy what you eat... If the food is made with love, the calories will melt away...
I always enjoy every bite of Aunty's Italian Cookies and my mother's pistachio cake. Miraculously, I can still zip into my jeans the next day. A nice long walk in between helps.

Dazzling shoes up next...

Labels: be happy, happy thanksgiving, homemade food, made with love

HULA HOOPING IN THE MOONLIGHT 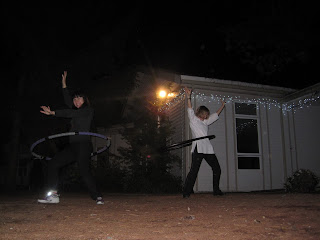 Another way to stay Ageless...
Saturday night, after a full moon gong and meditation, Lori, Aunty, and I, went outside to soak up the Autumn moon. We noticed some hula hoops against a tree. I picked one up and started gyrating. What fun! Lori couldn't resist, and followed suit. With some assistance, Ageless Aunty joined in... 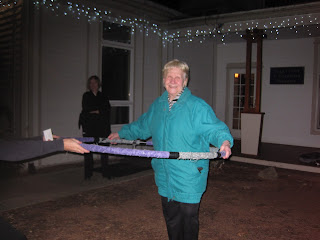 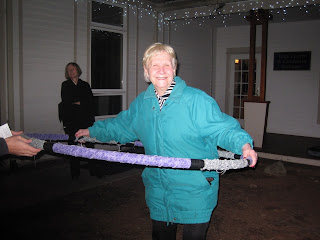 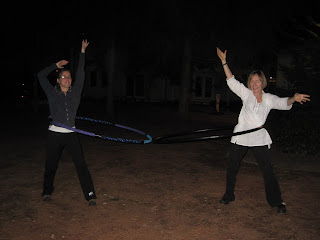 Ageless
Coming up next...a pair of ageless & magical shoes. And speaking of shoes, in light of recent posts about the shimmer and glimmer around me, did you notice the sparks coming from my sneakers, and the light behind me...
Stay with Ageless, the blog that is also a beacon!
Posted by Renee Gold at 8:54 AM No comments:

Labels: how to have fun, how to live better, how to remain ageless, irrisistable fun

Since many of you have been asking who the man was I met in the elevator last week, in New York, I will tell you. Right before the elevator operator shut the door, I heard a voice say, “Just a minute.” A man and a woman stepped in. The dude was tall and handsome, with a presence that overpowered the small space. When I realized who he was, (remember, I am a movie fanatic) my heart started beating so fast, I thought I might faint.


He cordially introduced me to his wife. As lovely and as personable as she was, I was so excited about talking to Tommy Lee Jones, I forgot her name. But, I could not forget all the roles he has played. My personal favorite was Doolittle Flynn in Coal Miner’s Daughter. I saw that movie at least seven times. He has starred in countless movies from Men in Black, and Lonesome Dove to The Eyes of Laura Mars and No Country for Old Men. He is currently filming Men in Black 3…

Tommy as "Doo"
You might be thinking I should have asked for a picture with him. I probably should have, considering part of this blog is about me chasing (the) stars. But, in that moment, I was on his level. We were at the same hotel, on the same floor, talking about how much we love New York; I just couldn’t burst that bubble. However, we were on a top floor, and the longer ride down gave me more time to gush~
Posted by Renee Gold at 9:29 AM No comments: 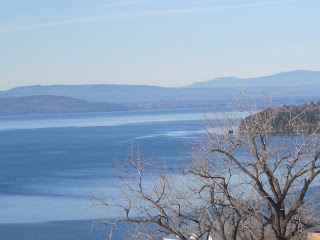 This past weekend, right after my “Lucky Stars” post, I drove to Vermont to visit my niece. From the  hotel the view of Lake Champlain was breathtaking. But, when I stepped out to my balcony, the three stars at my feet were the real showstoppers. I just couldn’t believe it myself. I had to go back into the room and walk back out again. There were my three lucky stars! 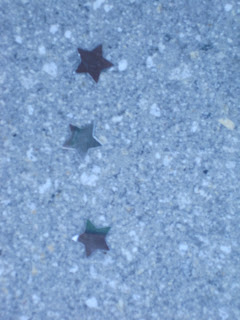 Something is brewing for me, and I think it’s something big. My readers are all welcome to come along. Strap yourself in. This is a bumpy yellow brick road we're on.

Have you had any encounters with the stars lately...
Posted by Renee Gold at 1:49 PM 4 comments:

THE PIZZARELLI'S and MY LUCKY STARS... 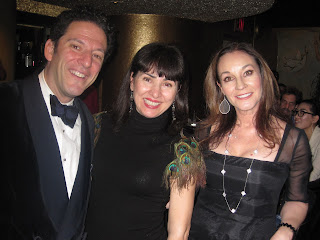 John Pizzarelli & Jessica Molaskey
Lately, all I have to do is wish something, or simply mention it, and voila…there it is…

A generous friend put me up as her guest. The Carlyle is a swanky and truly old-school New York hotel. The Pizzarelli's perform in the elegant Café Carlyle, where you will find little pink lamps on the tables.


While my friend and I were traipsing through the lobby, chatting about agents, and my future as a writer, she said, “I just know you are going to make it Renee.” No sooner had she said that, we stopped in our tracks, in awe over the three gold stars on the door. “My lucky stars,” I gushed. 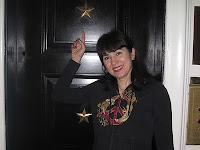 When I talked earlier about the stars aligning, I wasn’t kidding. If this keeps up, I should have an agent soon (especially since all I do is work in-between these posts). Becoming a celebrated, published author has been my dream for a long time. I want to share the message that life really is a banquet!
Allow the laws of attraction to work for you. Put something out there that you wish for or believe should happen for you, then see it to fruition.

Next post, I promise to say who the famous actor was, that I met in the elevator. Hint: he wasn’t wearing black…any guess?

By the way, the show was sensational, and you can check out everything Carlyle at http://www.thecarlyle.com/

See Woody Allen play the clarinet on Monday nights, and pictures of Jackie O on the walls.
Posted by Renee Gold at 7:03 AM No comments:

a girl with a view
Just like Marlo Thomas in the TV series That Girl, this girl is seeking fame and fortune in New York!  After only one day, I already have much to blog about, including, how I met a very famous actor in the elevator of a swanky hotel...

Enjoy the week. I will be back Monday to tell all.

In the mean time, Oprah's Spirit Newsletter sent out an email today about how to Live Agelessly~
Her experts share a lot of what has already been said here. So, while I am away you can scroll around the blog for some sure ways to keep young & happy. Here at Ageless with Aunty, we stay upbeat, even in down times.

Can I ask what you love most about New York?
Posted by Renee Gold at 8:01 PM 3 comments: 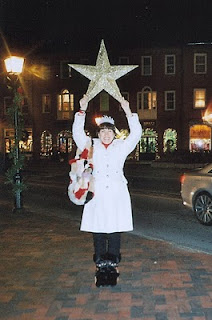 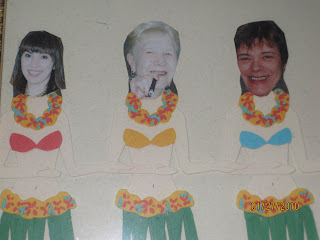 Bring Aunty and Grace to Maui 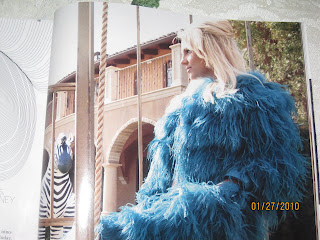 and wear the Blue Valentino Coat to book signings
~See Your Dreams Come True~
Posted by Renee Gold at 8:47 AM 2 comments:

Labels: be it, believe it, live your dreams, see it

HERE'S LOOKING AT YOU, AUNTY...

Aunty's mirror says....We are always the same age inside...
Don't you think Aunty looks marvelous for almost ninety ageless years!
She tells me, it's all those red apples, green tea, and living out our blog, Ageless with Aunty.
we practice what we preach.
And make life our banquet 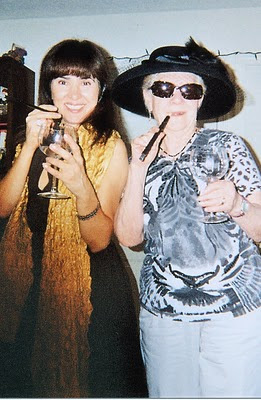 Ageless Aunty with Evian water, a fake cigarette, and playful zest
Posted by Renee Gold at 7:46 AM No comments: