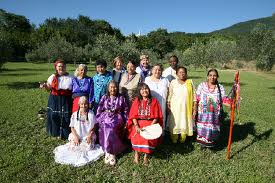 The Salt of the Earth
Dear Readers of Ageless…


Grandmothers are wise…they know the answers,  they speak the truth… if we are smart we will listen. I had the distinct privilege of not only hearing the 13 Indigenous Grandmother’s speak, http://www.grandmotherscouncil.org/ but of driving some of them to their speaking engagement! They are prayerful, mindful, and wise. They know we must change how we humans are abusing this planet. And they desperately want a clean future for their grandchildren. Among them all they carry the state of the world on their shoulders. They know the future of this planet will not be a good one if we continue to abuse  Mother Earth. I  saw the pain in their eyes and the tears that followed. 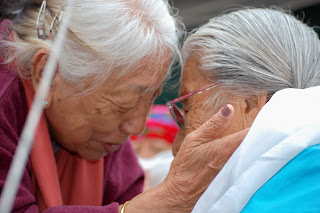 On a lighter note, while I had them in my car I played some of my favorite music, Van Morrison, for them. Bells Were Ringing Down at The Kingdom Hall blared out on the way to their gig. I rolled the windows down and let the breeze blow their braids. I showed them pictures of Aunty. They all agreed she looked like a movie star!  During our little road trip  I engaged them in a conversation about tea.  Grandma Mona said she enjoys ginger tea with lemon and honey. Another said she likes to make a  sage brew. Grandmother Beatrice makes her own spearmint tea.  I realized that I had prayer, and my love for music and song in common with these wonderful elders, not to mention a love for family. Family is what they care most about. Some of them even travel with their children/grandchildren. I really felt a connection and a bond.  One of them had a name that I would like to think I would have had if I had been born on a Native American reservation…Holy Dance. She would later tell the packed hall that she gets up every morning and in her bare feet goes out to greet the morning sun with her arms raised above her head and prays in gratitude! “I pray all the time,” she said. 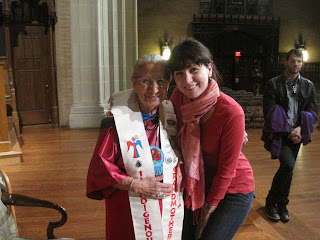 honored to stand with the Ageless Holy Dance
Take a moment and go to their site, maybe even send a donation. You have my word…they are worth it. The future of the earth is worth it.  The grandmothers say each one of us makes a difference. Grandmother’s speak the truth. They represent the past so eloquently. I pray that their message is heard and carried safely into the future.
http://www.grandmotherscouncil.org/
http://www.forthenext7generations.com/trailer.php
Lela Washtae Che La Ke
Renee Faith
Posted by Renee Gold at 8:00 PM

Wow, 13 Nanas! We all love our nana and listen to her words of love. With traveling grandmothers, imparting wisdom and reverence, as well as concern for Mother Earth must have been a blessing. It seems like you get wiser, and want to become a messenger or activist for saving our planet. Take action! Check out www.350.org too.

What conviction and dedication to travel to awaken our senses, and eyes to the unwanted and negative destruction, pollution, and lack of concern for Mother Earth. What are we leaving behind for our kids and the younger generation, if anything? Some species, plants, fruits, etc. are already extinct. Saving the planet begins with you! Thanks for sharing.