THE LITTLE PEDI CAB THAT COULD... 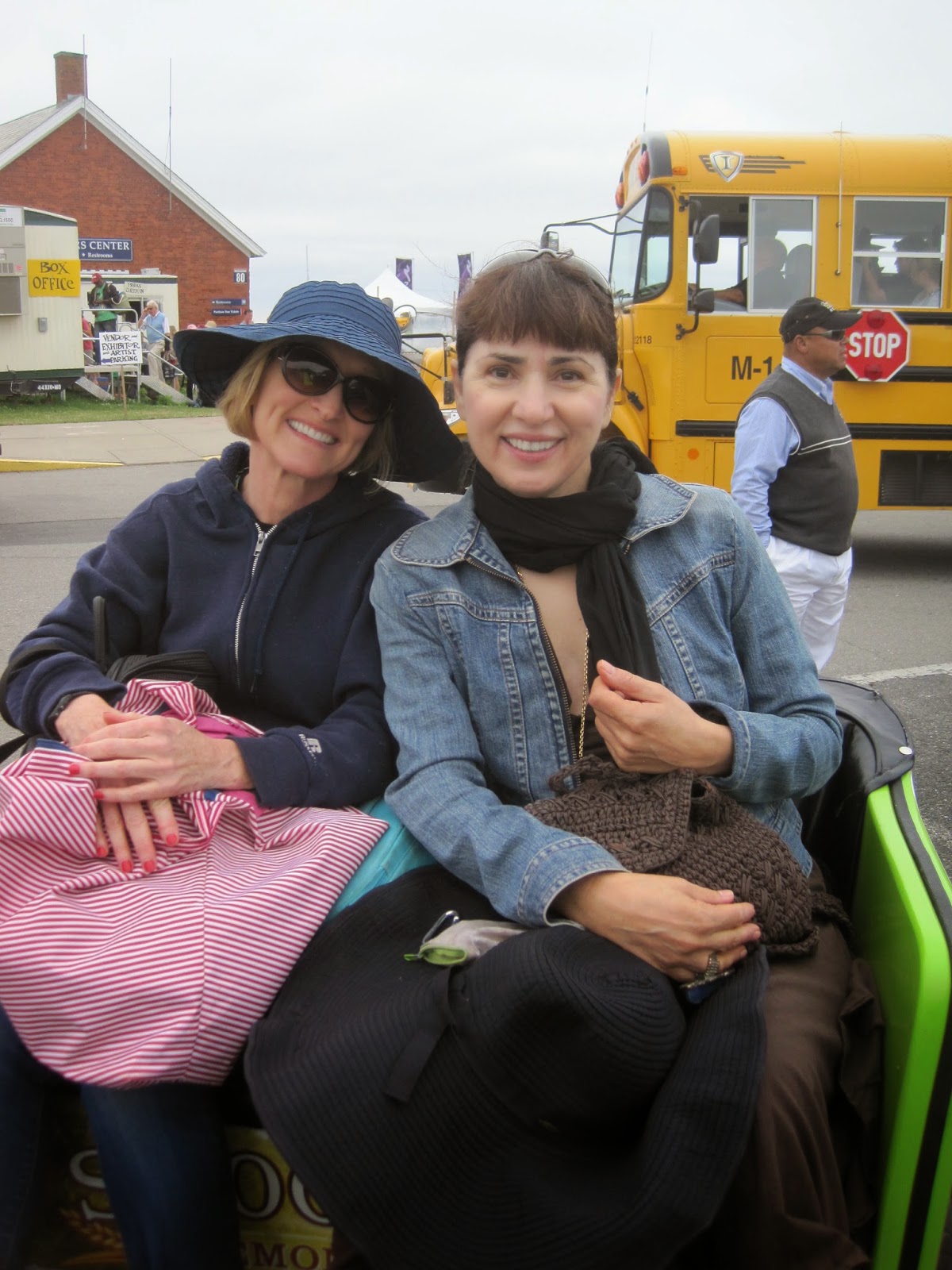 Arriving in the nick of time...
I couldn’t be late! I had two tickets to the Jazz Festival in Newport Rhode Island to see my friend the Amazing Grace Kelly perform. Everything was all set. My pal Lorri and I left Boston at nine-thirty in the morning. We filled the car up with snacks, sunscreen, beach chairs, and two tall iced green teas (Thai Flower to be exact). Everything was perfect. We hit Newport in plenty of time and even commented on how easily it was all flowing.
We decided to park at the site of the festival rather than take the usual boat ride over to the event since we had a little extra to carry. We got right into the parking lot without too much trouble. WE were chatting and I was texting (she drove) and not paying all that much attention to our parking spot. Once we got out of the car we had half an hour till show time. Then we looked up in the distance and saw a long line of people. Then we looked further out and saw an old school bus. The line was longer than one bright orange bus would fill and surely there would be a long wait for the next bus. I heard someone say we were over a mile away from the actual front gate. It seemed like a logistical nightmare. And one I had yet to encounter in all my years attending this marvelous event. 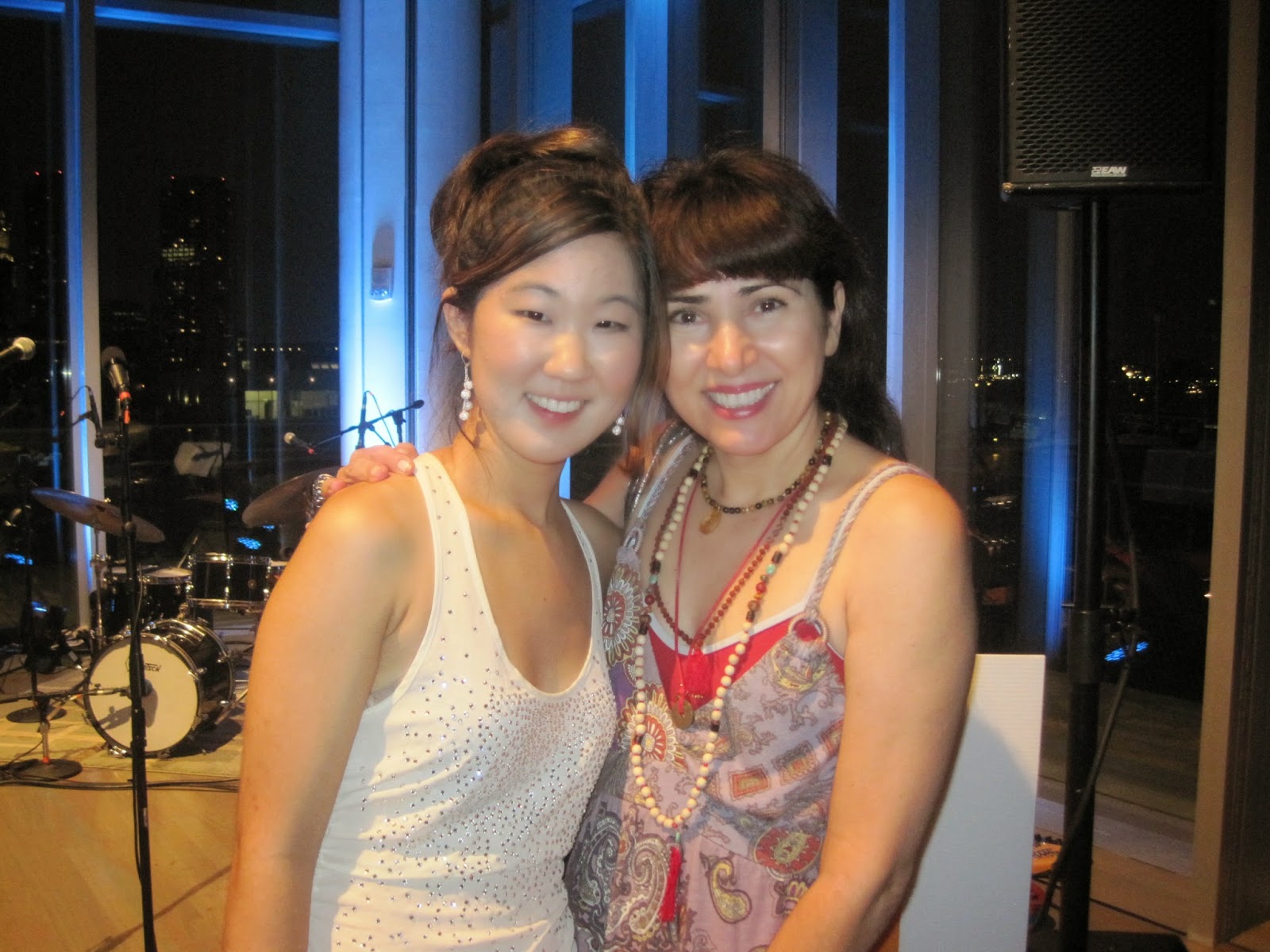 with Grace Kelly in Boston
All I could think was I just can’t miss Grace Kelly perform. Lorri agreed and started to panic. We realized that this lot we had been directed to was way the heck out of the way and we would surely be late! But then my friend started to smile and looked at me and said, “I know you will get us in there somehow.” I agreed. She added, “You always figure something out.” She had a point. Besides, this was a jazz fest we had to be cool.
I told Lorri to “wait here a moment,” and I started to walk around the bend. Just then I noticed a man with a rickshaw, well, it was actually a Pedi cab. I immediately started to envision him biking us over to the event from the little cab hitched onto the back of his green bicycle! I raced over and asked...
“Can you please get us to the Festival immediately? I have to see my friend perform. I have a friend in the show!”
“Jump in” was all the tall, thin, athletic guy said. I ran back to Lorri, with the guy peddling beside me, grabbed our things and packed ourselves in. As she was being hoisted up Lorri kept saying “This is your karma. Only you could have manifested this.”
This dude started peddling so fast we literally had to hold on to our hats and we flew past all the patrons, and flew past the buses. We soared up a hill, and down another. WE screeched with delight. It was exuberant. We stood a good chance to catch Grace.
Without missing a beat we arrived at the front gate with time to spare. We gave him all our cash, our peanuts too, jumped out and said good-bye. With precision synchronicity we sauntered over to the Harbor Stage just as Grace picked up her sax. She was terrific. To make it all the more special she was performing alongside her mentor Lee Konitz who had opened the now revered festival sixty years ago!!! Getting caught up in the moment, the man standing next to me filled up with tears.
The Newport Jazz Festival 2014 was incredible. We saw so many talented Jazz acts and musicians, each performance better than the last. We met up with friends and followed their recommendations and heard some phenomenal music from the Ron Carter Trio and the Django Project (with three of the four super talented musicians from Paris) and Peter Beets flying in from Holland to join them! Later Bobby McFerrin carried us away with a stellar performance. There was even a proposal of marriage during the Ron Carter Trio's elegant rendition of "My Funny Valentine".
If my friend and I hadn’t thought positive and believed we would find our way we might still be stuck waiting for some old bus. So, when things don’t go your way don’t give up. Smile, Pause, and look for a Pedi-cab. It also helps when you have friends who believe in you!

Never a dull moment for you!!

What a story! Who wants to miss the upcoming and famous jazz player Grace? She is incredible as I have seen her in concert too and even have a CD or two. What a line up of musicians! I too enjoyed the Newport jazz festival at other times. What a blast!!!

HI Anonymous...you are most kind! I appreciate what you say here.
All comments help keep the blog alive.
Aunty smiles from heaven too which is a bonus. She loved her blog...

That was truly a Renee and Lynne moment. Pedi cab cab saved the day. He must have been waiting for us!! Happy 60th to the Newport Jazz fest!!