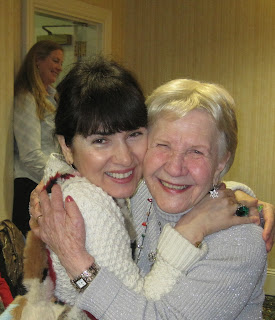 Many of us do the best we can and keep striving to be and do better. I know of one person who did even better than the best they could for everyone, with every breath they took, every day of their life…

That was my late Aunty Helen. She was the most Christ-LIKE of any human I have EVER known. She graced our world for 88 years. It was nine years ago today, November 18, 2011 that she passed with me right by her side as close as I could be…

When I remember over the years hearing anyone say  that so and so had a peaceful and beautiful death I really didn’t understand it. I have also heard people say As in death as in life. I take this to mean that you do reap what you sow and you take that with you. Since Aunty truly did exemplify loving kindness and was remarkably virtuous, never ever harming anyone, she crossed over with ease and grace (if death can be easy). I could sense, and almost see the angels and her ancestors waiting for her with open arms.

If death can be beautiful then Aunty’s was. It was a Friday night. The house had been set up for Christmas early that year when I realized Aunty was going to pass. She LOVED Christmas trees so much that Ming and I had to have one set up for her. Some of my favorite Christmas memories are her admiring our tree with such delight and wonder. (Like my Mother, Aunty is Christmas to me)

This particular evening the lights were twinkling and shimmering brighter than before. The air was filled with divine music and some of Aunty’s favorites like Snatum Kaur’s devotional music, Andrea Bocelli, and soft angelic Christmas Hymns. The songs seemed to be coming from another realm and suddenly sounded symphonic even from my portable CD player. The room that she was lying in was illuminated only by candle and Christmas lights. Around six pm. Ming came over. After hugs and kisses for both aunty and me, he of course went into the kitchen to prepare dinner, yet he kept checking in with me and Aunty. He so loved Aunty too!

I sat by Aunty’s side while she was resting. I held her hand and our already extremely close bond intensified and became eternal in the following moments. I had set up pictures right by her bed of her late husband, her late daughter, her mother and father, her grandchildren and great grandchildren (all whom Aunty utterly adored and lived for). As the candles flickered, the lights twinkled, suddenly the soft Christmas music deepened and became spiritual…a greater force seemed to be setting the tone for a most perfect cross over to the other side for an angel named  Aunty.

It was around quarter of seven on what felt like a holy Friday evening. Ming came into the room and said his good-byes to Aunty full of tears. He told me, “Sweetie, its’ time.”  He went back to the kitchen. I have to say, there was nothing at all morbid or scary. As a matter of fact, everything became elevated. Aunty started moving her mouth as if to say I love you VERY MUCH and I will always be with you. To me it seemed like she was smiling.

What happened next will always feel like a miracle to me. I was as close to God, the angels and the saints as I ever was. As her precious spirit was starting to leave her body so it could soar for eternity…

What came out of my mouth were PERFECT words. I assured her with conviction and beyond any doubt that I would love her forever and that I would see her in heaven. I thanked her for her love and her life of true self-sacrificing love; the love that she gave me, her husband, her daughter, her parents, her brothers and sisters, her grandchildren, her great grandchildren, her friends, and anyone who she had ever known.

I reminded her how much we ALL love her and ALWAYS will. I assured her that her husband, daughter, brother and sisters, mother and father WERE WAITING for her. She smiled and smiled again. She was completely at peace saying I LOVE YOU. I hugged her and held her and she took her last breath in my arms. And not surprising to me at all, even in death she assured me that she would always keep an eye on me and on all of us…as she kept one eye open.

Then as if she were a saint, or because she reached a Bodhi-Sattva state, I anointed her with lavender oil. I carefully poured some into my hands and gently rubbed her arms and legs and Ming helped too. We prayed and we wept and we lit even more candles. We stayed by her side.

I think it’s noteworthy that she passed at this time of year. She was so in tune with nature and even her passing was a sublime nod to her alignment with God, the very force of life and she was so in sync with the seasons themselves. According to the One Willow Apotheacaries dying in Autumn represents; A time of harvest and longing, celebrations, endings and melancholy, autumn is a potent mixture of all the exquisite fulfillment and color that accompanies the ritual of dying. It reminds us that dying is, in truth, a time of the deepest abundance and celebratory release.

Till this day I light a candle every single night for Aunty! EVERY single night. And because I knew that she was going to pass, I had a few months to prepare, I took in all of her essence. I paid close attention to everything about her and with that, even in this moment, I am able to fully feel as if she is right here with me. I feel her love and it warms me and comforts me just as it did when she was in human form. I believe this is one of my greatest blessing! This blessing continues with Aunty and Uncle D’s great-grandchildren and the children they are bringing into the world….it’s a lasting legacy of love that they started. They live on in their offspring’s offspring’s offsprings…etc… My hope and prayer is that for generations to come they realize from what greatness they came.

Not too long ago when I did a post about Aunty her granddaughter said it best, “I miss everything about that woman!”

God Bless all of you and thank you for reading this about our Aunty. I can assure you she loves you too. Let’s all take a moment to fully remember our loved ones who have passed. Think about what it would feel like if they were here in bodily form….their scent, their look, their actions, their smile. How they made us feel. Their spirit is surely alive! Know that they still LOVE us and that one day we will see them again. Like Ming said, “For the time being If you listen and breathe deep you will hear them speak. Love NEVER EVER DIES!”