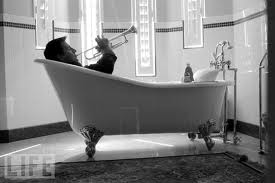 Louis Prima Jr.
If you are looking for something fabulous to do this cold Monday night, if you live in the Boston area, look no further than House of Blues. The son of music legend, Louis Prima, Louis Prima Jr., will be causing a sensation. You know most of his late father’s songs already....And, they belong on this blog because they are absolutely Ageless...

The catchy tune being played at the beginning of the movie ELF, as Will Ferrell makes his way down the streets of New York, is none other than Louis Prima's Pennies From Heaven. Louis Prima's songs have been featured EVERYWHERE, from Disney's, Jungle Book (that was Louis singing the Monkey Song, I Wanna Be Like You), to Gap Commercials, Woody Allen Films, countless other films and television shows, including The Soprano's. He is the original “King of Swing!”

You couldn’t/can't sit down when Louis Prima (father or son) is up on stage. I can not think of anything more fun than dancing to some of the greatest music ever, like Jump Jive An’ Wail, while being this close to a music legend. And, it's all for a good cause.

For more info about the show go to www.hob.com/boston

What a tribute….it’s just fantastic that Louis Jr. is keeping his dad’s OUTSTANDING musical legacy vibrantly alive. Check http://www.louisprimajr.com/ for a show in your area.
Posted by Renee Gold at 9:52 AM

Labels: fun night out, how to have fun on a monday night, how to stay ageless, louis prima, louis prima jr. house of blues