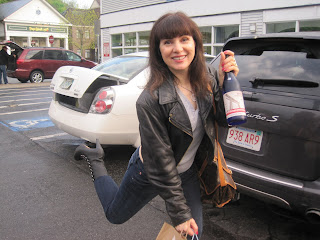 Me and my cold Momokawa Sake

As promised, I carried the festivities of celebrating my May birthday, all the way into June…with a little bit of help.


When smll group of friends helped me celebrte this yer, gthered round the tble of smll Jpnese resturnt, we strted singing nd crrying on. I knew we might cuse scene if we continued the high-decibel merrymking. We quieted down nd went bck to hving our regulr fun with n ordering frenzy nd sushi fest. But, something tells me we were just s loud. I don’t think it’s possible to enjoy yourself that much in  resturnt without little noise.
A couple of weeks ago one of my sisters took me out to lunch to honor my birthday. And what a time we had. We laughed so hard I honestly thought they might ask us to leave. I didn’t know you could feel so good at one o'clock in the afternoon on a Tuesday. My sister even bought me a cup of the world’s most expensive and healthiest tea.

One of the most touching gifts this year was from my sister who lives in California. I don’t get to see her as often as I would like to and I love her very much. When she was a toddler she got into my Beatles Album collection and scribbled on the covers and broke one of the records. I was devastated! I secretly cried (because I didn’t want to hurt her feelings because she was so young). I thought I would never get over it. I LOVE THE BEATLES!

Well, last night after that same sister treated me to the most outstanding lobster dinner at the Blue Ginger (my favorite restaurant) she had them bring out a cake she had had made just for me. It was a big, funky cake with a record player (that looked like the one I had growing up) with a Beatles Album being played!!! I was  stunned. I was also touched. Then it got even better. When the waitress came back to cut and serve my creative delight… the cake was Red Velvet! I was over the moon knowing that my sister loves me that much! And, that I got my Beatles Album back. 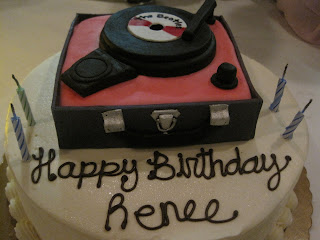 Thinking about it now…by not getting overly upset with the desecration of my beloved record collection, all those years ago, I was putting out good karma. And, decades later my Beatles Album came back to me with love, sugar, and a sister’s smile. 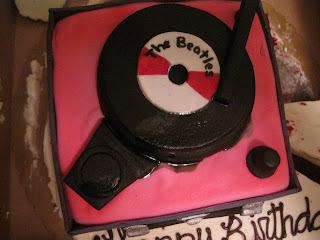 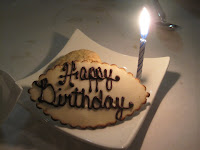 Labels: houw much do you love the Beatles, how to celebrate your birthday, how to have more happiness, more love, my broken beatle record, sisterly love, the Bealtes, the beatles are still relevent

What a special day and what a fantastic sister you have! I love red velvet cake and the Beatles, too!

I'm sure you had a great time and also laughed together! letslaughtoday.com

"I used to live for my stereo and my record albums"...well, before everything went digital. Re, I know how much music means to you..how could I ever forget when you asked them to play Peg by Steely Dan when we were out to dinner for MY BIRTHDAY, and you danced up a storm!!! I also remember singing Carpenter songs while were were dancing with my cats!!! The Beatles are still in my heart...and in my ears! LUV U!

For the sake of sake! That may have been the best Renee-A-Palooza in years!