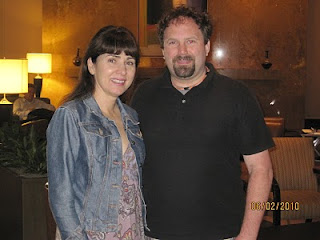 Cousins Connecting Over Tea and The Continents...
Many of you have probably heard the accurate statement, what you think about expands. I have also found that what I blog about expands.
Take for example my love for family, tea, and the desire to go to Japan. I always talk about tea, and just the other day I wrote about my affinity for Japanese Culture. After that post, I continued thinking about how much I would love to attend a real tea ceremony in Japan.
This is where the laws of attraction kick in. By doing this writing, thinking, focusing, and visualizing … suddenly I was there (well, in a way). I am not in position right now to spend two thousand dollars, jump on a plane for fifteen hours, and head for Japan. But, none the-less… I was putting all this energy into the universe with my laser sharp thoughts and visions. 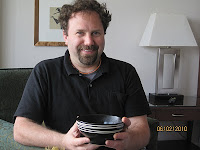 As it turns out, I emailed my long lost cousin who lives in Japan. He immediately responded by telling me he was in the states. He had just given a talk for his dissertation at none other than Harvard University. He was not too far away from me. He invited me to tea. He had brought along some of the real thing... the green matcha powder, the whisk and the bowls, (the utensils used for the tea rituals). Before I knew it, I was in a hotel room in Boston drinking green tea out of a bowl with my Cousin Joe from Japan! Speaking to me in Japanese, he served me up as an authentic Japanese tea ceremony as possible. It was a well manifested green moment.
This is why I share with my readers, and ask them to see good things for themselves. Imagine your dreams. Believe they can happen. For me it might have just involved a traditional cup of green tea with my cousin. But, next time I am going to imagine  sitting down discussing my book deal with a savvy agent. I will be so alert and full of life… one of the many benefits of green tea. The tea alone might not land me an agent, but if I drink enough I will have the stamina to write for a life time.
AGELESS TIP OF THE WEEK: Anything is possible when you drink green tea and stay positive~ 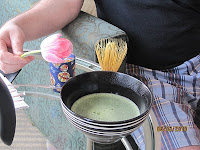 And for more on the amazing health benefits of green tea *including how to prevent gum disease, go to:
http://www.hibiki-an.com/
http://www.rishitea.com/
Posted by Renee Gold at 10:50 AM

You disappeared! First time you've popped up on the blogroll in ages. Missed ya! Your cousin sounds like a really great guy. PhD at Harvard, wow! Happy you two connected. That tea ceremony is fabulous. Too bad the tea's dreadful. (We're leaving on the 15th. All's pretty much in order.)

Hello! It's great to meet you, and thanks for your comment. Blessings, -Susan