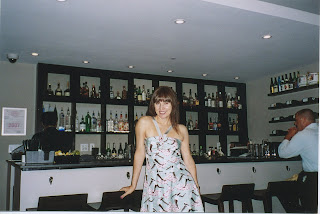 I need a drink...
I am amazed at what people do, myself included, when they hear those magic words....OPRAH WINFREY.  I finally had my video audition uploaded for Oprah's new reality show tryouts. It is now officially on her Own TV Network site…... and that would explain the caption under my picture here.


If you dare look at it, please keep in mind…my tape was shot with a regular camera (many of the other contestants have highly polished professional video entries)…

I had five minutes to film, and in a room that was five hundred degrees. The person I was supposed to interview never showed up. Aunty had to stand in, but for some reason, she was not her vivacious self. The location we had planned to use was suddenly filled with children (and that specific area at the end of my street had never ever been occupied like that before). We decided to shoot inside even though yellow-jackets were flying around. One wasp tries to make a cameo appearance. I learned a lot about filming. You must always expect the unexpected, and then literally roll with it!!

The lovely young woman shooting for us was pressed for time. We had no rehearsal. But, we gave it our best shot under all circumstances. And, the only thing I forgot, aside from a few lines (another big mistake, I shouldn’t have had a script) was … my LARGER-THAN-LIFE personality! After just seeing the video now, one close friend asked, "Where was Renee?" I didn’t even smile. But, like Aunty says, “You can do plenty of that when you win.” My neighbor says, I would have had a real chance if I had just let my true spirit shine.

However, there is a sliver lining……. I have a story for my readers.... and, a possible name for my show...Blue Skies…

The reason our director only had five minutes was… she was on her way about to jump out of a plane into the Blue Skies! Now that I have seen my audition played back… I feel like jumping too….off the face of the earth….
Ageless tip of the week… If you ever want to be considered for anything Oprah…don’t shoot your audition tape on a wobbly snapshot camera in a hot apartment with bees.~
Posted by Renee Gold at 9:39 AM

Labels: be prepared, meeting Oprah, my own tv show, Renee Gold, the best blog on the web...