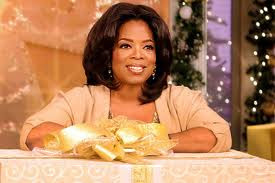 Right there next to Elf and It’s a Wonderful Life, I would like to add a new entry to the list of Christmas Classics …..It’s Oprah’s Ultimate Favorite Things 2010. It’s the only show I have seen that gets better each moment. We all cry and rejoice at the end of It’s a Wonderful Life, hard not to, but, with Oprah’s staggering generosity, I cried the entire show from start to finish. There she stood, an angel wrapped in gold, bestowing endless gifts to teachers, caregivers, parents of sick children, and hardworking adults who otherwise might not ever receive such extravagant presents like diamond earrings and iPads and relish in childlike bliss. The only other time my heart swelled like that was during the scene in White Christmas when the aging General finds out he is not forgotten. It’s a stellar movie moment in compassion. Oprah gives us that too, but, for an entire hour, to real people, not actors, in her Ultimate Favorite Things episode.
Any way you look at it, Oprah’s Favorite Things 2010 is in a class by itself: an hour of pure giving at Christmas time, to happy, deserving people who scream, jump, cry, leap, swoon, and melt. They create happiness hysteria. I honestly don’t know anywhere else (aside from a church) where you can witness this kind of off-the-chart joy. And, while the audience is handed one gift after another, including keys to a brand new car, Johnny Mathis and Josh Groban serenade them to Chestnuts Roasting On an Open Fire….live! Like I said, it just gets better and better as the show unfolds. You can take my word for it; this is one Christmas Special you have to see to believe.

As I watched, for a moment, I thought, how awesome it would be to be on the receiving end, and get just one of those dazzling gifts myself. I would do cartwheels if someone gave me a single iPad. But, as it turns out, I would be just as happy with a copy of this bona fide Christmas classic to share with my friends and family. It’s a gift in itself. The message is simple, and one I share whole heartedly…keep hope alive, as Oprah states herself at the end of the show. You never know, something good could be right around the corner.

Oprah’s spectacular Christmas Extravaganza is now one of my "favorite things." I want to give a copy to everyone I know. Because, if it’s one thing we learned from watching those Christmas Classics (especially Oprah’s) it’s better to give than to receive.
Posted by Renee Gold at 12:35 PM

Happy New Year Renee - Thanks for keeping us entertained with Auntie's antics and lots of good karma. SWA