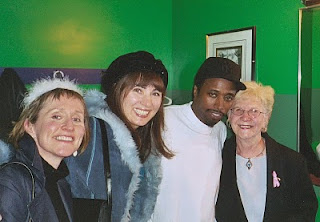 Undercover to Meet a Brother
Eddie Griffin is a flamboyant and cinematic actor/comedian. He is best known for his sitcom, Malcolm & Eddie. I know him best as Undercover Brother. He starred in that halarious 2002 film. He also made Comedy Central’s list of the 100 Greatest Stand-ups of All Time.

When Aunty and I went to see his rather risqué stand up routine, we were pretty excited. There is often a high energy vibe running through live comedy shows, especially if you are big fans of the star. That night it was electrifying as we sat right up front, with Mr. Griffin looking right at Aunty. Thinking back, he must have been wondering what the heck an eighty-year old, white woman was doing at one of his shows! He does use a lot of x-rated language. But, Aunty laughed so hard, I thought she might get sick. After the show, I was determined to meet Eddie. I knew Aunty would get a rise out of such an experience. We hung around for a while, dodging the management as they asked everyone to leave so they could make room for the next audience. Eventually we snuck past a bouncer and made our way to the backstage area.
Luckily Eddie’s brother, who was the comedian’s body guard that evening, took a liking to Aunty. How could he resist? I told him straight out, “Aunty here would love to meet Eddie.” Then, I whispered, "We are undercover, to meet your brother." With that, we removed our sunglasses and were ushered in…
As soon as we arrived to the backstage party, we were greeted with a big… “Hello Sweet Mama.” And Mr. Griffin wasn’t talking to me. He stopped what he was doing, walked right over to Aunty and gave her an enormous hug. She loved it. They started dancing as if they were old buddies. Eddie was gracious, offering us food and drink. He made us feel welcomed. We had a few laughs, and took this picture before we left.
If you haven’t seen Undercover Brother…I highly recommend it. That film is laugh out loud funny. And next time Eddie, or another famous funny man comes to your neighborhood, bring your own Aunty and see how far backstage you can get….
Posted by Renee Gold at 6:08 AM

What a beautiful and fun memory. I think Eddie was beyond delighted to be hospitable to a class act (for he seems like a class act).