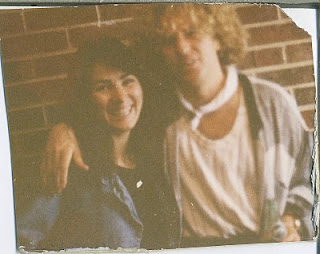 Why Can't This be Love?
My boyfriend and I had driven an hour to go see Van Halen in the summer of 1986 for their 1986 Tour. When we reached a restaurant across from the concert hall, we stopped. My boyfriend parked his new Trans Am right out front and I waited while he went inside to check out the menu. The sun was strong that day and as I looked up in the glare, I thought I saw my boyfriend with a blonde woman. He had his arm around her and was waving to me from inside. Because my super macho boyfriend seemed so animated and wouldn’t stop waving, I had to take a closer look. I got out of the car and looked up again, and realized he was hugging Sammy Hagar, the lead singer for Van Halen! I leaped out of the car, left the door open, and ran up into the second story restaurant.

We hung out with Sammy for a while and he was just super cool. He asked us where we were from and what other bands we liked. And, since I had just moved back home from California, we talked about life on the West Coast. He seemed to really enjoy our company.
Later, smack dab in the middle of the show, Sammy noticed us. He pointed right to us and said hello as he stood center stage. I can’t even tell you how amazing that felt. I mean, for any of you rock and rollers out there, picture yourself in the second row at a sold out Van Halen concert in the 80’s… a summer night, and the lead singer stops the show to say hi, referring to you and your date as “his friends.” I honestly thought my tough guy boyfriend was going to faint. I almost did when Sammy kicked into “I Can’t Drive 55!” It was a pure adrenaline rush that I won’t ever forget.
If you haven’t listened to Sammy for a while please do. In 2008, he formed a "supergroup" named "Chickenfoot" with Michael Anthony, Red Hot Chili Peppers drummer Chad Smith, and guitar virtuoso Joe Satriani. Their self-titled debut album was released in June 2009 and debuted at #4 on the Billboard Music Chart. Sammy deserves mention on this blog because like rock and roll itself…he’s Ageless. Charitable too~
Posted by Renee Gold at 8:47 AM

OMG! Is that Mr.PS?
I am laughing so hard I could pee in my pants.

Mr. Macho had a perm?

I tuned into your blog for a mid day pick me up, being stressed out. I can always depend on you.

You look radiant and super cool as always. I guess that is why you know all the celebs.