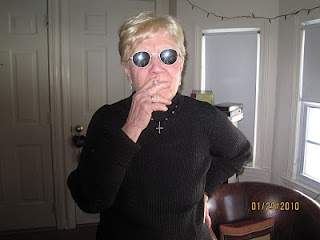 She is Hogging My Blog...


We all know that sometimes life is not fair…
And that goes for blogs too.

Take this blog for example, here I am a hard working writer (already working endless hours, and seeking representation on my first book, and giving up most of my life to write the second). Due to my animated personality and Chutzpah laden stories (which is what I write about), on the advice of agents, friends, and co-workers, I started this blog (more hard work and effort, not complaining, just stating facts). These days, writers must do more than write. They want us to have an audience before we get published! A blog is one way to do that. And, speaking of an audience, (as far as I have been told) everyone who reads this blog enjoys it. None of this is the unfair part by the way. The problem is…

Once Aunty found out what a computer was and discovered the Internet, seeing those pictures of her all over (what we call a blog) and the reception she gets in the real world since the blog began, she is always asking me to post a new picture and story about her. There is no other way to say it. She has become a Blog Hog! And you heard that term used here first. (Could I have invented it)?

But, since my Motto is Where There’s a Will There’s Renee…my next post will feature me posing with a hot and famous Politician. I may call this blog Ageless with Aunty, but, she is only half of it. The rest of the fun is mine!

Stay tuned as Aunty and I vie for your attention, and the attention of Rock Stars, Politicians, Celebrated Authors, Agents, Actors, and Anyone famous…
Posted by Renee Gold at 12:46 PM