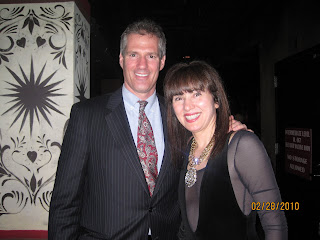 I Still Can't Believe It
I want to say I met Mega-Star Politician Scott Brown and leave it at that. Do I really need to say more? But, I know my readers, and you will naturally want the whole story. Well, I wish I had one. The way this picture came to be is so straightforward, I almost want to make up something dramatic or madcap. But it went down like this:

My friend invited me to A Rock and Roll Fundraiser (Devi Blue Foundation). The last person we thought would be there was the new Massachusetts Senator Scott Brown. We were there to see Aerosmith and New England Bluesman James Montgomery. Out of the corner of my eye I saw this tall handsome man. Lucky for us he was headed in our direction. I immediately realized it was Scott Brown. We said hello, made a little small talk. I mentioned the possible basketball game with the President and said he thinks it might happen. Then I just asked him if I could get a picture with him (I knew you might want to see it). He immediately agreed, and my friend took the above shot. Then, he went above and beyond any call of duty, and asked my friend if she would like a picture too. She flipped (she happens to be a Scott Brown supporter)…. And here she is with her man. It is the happiest I have seen Lori in years!!! Later that evening, when he passed us again, the Senator raised his glass, nodded to us, and gave us a genuinely warm smile. Some might say, oh that’s just politics. But, since this is my blog, I say no, that’s just courteous. Thanks Mr. Brown. You really make us Ageless. Lori and I feel like we are back in high school sitting next to the cutest boy in class. (Will you put us in your memior? The one Harper Collins is going to publish in 2011)

And for anyone wondering what Scott Brown was doing at such an event.... As it turns out, his lovely daughter Ayla sings with James Montgomery.