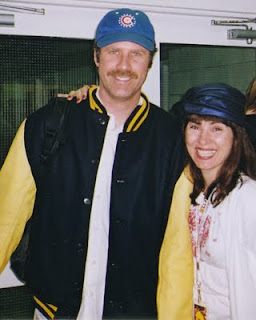 Elf & Me
As promised, I am going to share the story of how I met Jerry Stiller (see post 12-02-09). But first, has anyone noticed I have made good on another promise, (remember I told you I would post a picture proving that I had met an ELF). Well, here it is above. That is me with Will Ferrell, also known as ELF. As it turns out, I met Will the same way I met Jerry… by following my Passion. I love movies. And when I am not writing books, screenplays, or my blog, I try to see a film. Making time for things we enjoy helps us to stay ageless.

I also happened to be passionate about a pricey little place called Nantucket. That’s a small, well-preserved, historic island thirty miles off of Cape Cod Massachusetts. The town still has cobblestone roads, and only one franchise that I know of… A Ralph Lauren store on Main Street.

Last summer while attending The Nantucket Film Festival, I noticed Anne Meara (Jerry’s wife). I went over to say hello and inform her that I had seen an offbeat film that she and Jerry had been in (around 2000) called the Independent. This seemed to amuse her and she told me to “Go tell Jerry.” He happened to be only a few feet away, and so I did. Jerry got a chuckle too and was gracious enough to pose for a picture with me. He is, as it turns out, quite ageless himself, and so is his wife of over fifty years. All that laughing and sticking together through the years… makes them remarkably ageless.

When Will Ferrell made an appearance at the Nantucket Film Festival a few years ago, I put my chutzpah into full throttle and made a dash backstage. Everyone else wanted to meet Will too, so I had to think quickly on my feet. I had just seen him run in the Boston Marathon, so, while everyone was shouting to him about Elf and Old School, I said, “I ran next to you in the Marathon.” He looked at me as if to say… did you really… and I had to confess I didn't, but, by that time we were chatting and my friend took the above shot.

Become passionate about something… a place, a person, a hobby, or a project. When you meet your favorite celebrity you’ll find that you have something to say. It’s all just part of the keeping yourself Ageless process. Fun is the name of the game. Have some now!
Posted by Renee Gold at 9:00 AM