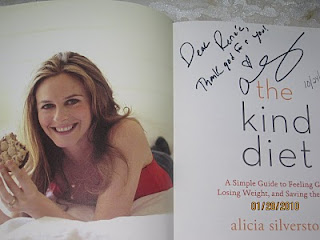 I had to meet Alicia Silverstone for a few reasons. First of all, I love her new vegetarian (cook) book The Kind Diet. Second, she is a celebrity, and third, it’s the Renee thing to do, considering my motto is Where There’s a Will There’s Renee. When you have ten thousand in attendance at a book festival (with most people wanting to meet the featured author/actress Miss Silverstone, and you know only a small portion will) those with chutzpah prevail. Besides, my friends and family anticipate me coming home with a story or a prize every time I go out the door…and I don’t like to let anyone down.


When I arrived at the event Alicia’s talk was sold out, and there were still people in line. I went up to the front just to get a feel for things and it wasn’t looking too good. They had stopped letting anyone in. But, since I really wanted to meet Miss Silverstone, I decided to look for another possible entrance. I found a side door where the organizers had planted a friendly young girl, probably to try and keep people like me out. I mirrored her smile and asked if I could go in when someone else comes out. Before she could answer, when an older gent walked out, I casually walked in. It happened that quickly. And lucky for me, the teeny-bopper at the door didn’t send security in looking for me (which may have happened once or twice before in my pursuit of celebs).

I grabbed the lone seat up front and listened to Alicia inspire everyone as she raved about the benefits of giving up meat and adding more vegetables to our diets.

As soon as the talk was over, while the audience was still applauding, I ran over to the adjoining room where the book signing was going to be, and nabbed a great place in line. Having already purchased the book I was one step ahead of everyone else, and closer to meeting the actress/author. The line started to move and suddenly I was face to face with Alicia Silverstone. She was so down to earth and approachable, we just started talking about barley tea, the benefits of being vegetarian, about book writing, PR, and how her book had even helped Aunty. Something told me that if there were not eight hundred people in line behind me, we would have sprouted some grain bread together, or at very least, compared brewing temperatures before drinking our organic twig tea.

After our little tete a tete, I walked away to see what Alicia had inscribed to me. When I opened my book, I was completely awed by her kindness…. She wrote: Dear Renee, Thank God for you!

Thank you Alicia, that meant so much to me, and to you my readers, I can’t wait for the day when I am sitting there signing my books for you! I am kicking my motto into high gear to make that a reality soon…
Posted by Renee Gold at 7:32 AM