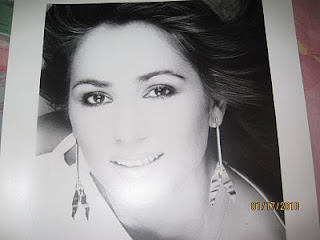 Back in the 80’s I won a contest through a popular radio station. The prize was a part in a Glenn Frey (of the Eagles) music video.

I spent the next few weeks shopping. I bought bathing suits, bras, and ten new pairs of boots. I didn’t eat any white flour, sugar, or meat for three weeks.
Whenever the phone rang I took a deep breath so they couldn't tell I was waiting beside it when I wasn’t shopping or starving.
Months went by and no call from the record company. I decided to visit my sister who was living out in LA at the time. During my stay I would check in with aunty back home to see if anyone had called regarding the video shoot. When I realized they probably had no intention of putting me in anything, let alone a video for MTV, I took matters into my own hands and did what my friends have come to call… “pulled a Renee.” I got dressed in a white jumpsuit, laced up my leather granny boots (a la Pretty in Pink) and put on a rather large pair of sliver earrings with lightning bolts …which represented that decade pretty well, not to mention how charged up I was.

When I located the where a bouts of the record company I took a cab over and marched into the offices of MCA Records. I confidently held up the newspaper clip about me winning the contest to one person after another. Eventually I waved it at some big producer, hoping he would live up to his promise. After a few minutes of yelling and pleading, starting with him asking, “What the hell are you doing here?”… He relented, and agreed to put me in another video. It wasn’t going to be Glen Frey… it would be Knight Ranger (the rock group who had just had a big hit with the song Sister Christian).

When I arrived in New York the night before the shoot the record company put me up in the room that the band had just checked out of. It was atrocious. Knight Ranger (a somewhat heavy metal band) had just spent the last few nights destroying it. There was no way I could sleep on a dirty bed in a shipwreck of cigarette butts and beer bottles. I checked out (I guess I had never really checked in) and put myself up at a decent place near by.

The next day I showed up “on location” secured into a pair of red pants (one size smaller than usual) and found myself being filmed in several scenes (at least I thought). But when I saw the actual video (for the song Sentimental Street) I was only in two. However, you could see me dancing in the club. After the shoot, guitarist Brad Gillis had someone tell me he was interested in getting together with me. I found out (on a few occasions) that when you are a rock star you have someone go out and get the girl for you. I was flattered of course, but that was not ever my style.

I went home singing the song Sentimental Street, and on quite a natural high knowing footage (with me in it) was going to be shown on MTV! It may not have turned out exactly like I had envisioned (it often doesn’t) but, I got what I wanted, and my motto, Where There’s a Will There’ Renee was born….
Posted by Renee Gold at 9:17 AM