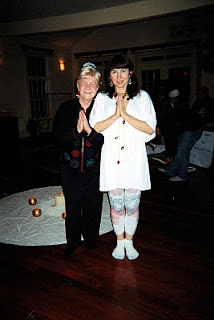 Anything is possible
Aunty and I just spent all morning praying for the people in Haiti. We are deeply saddened and ask anyone reading this blog to pray, and if at all possible dig deep (we did) and contribute whatever you can. After watching the footage on television (which I forced myself to do) I can not think of a better cause on this day…Thank you for listening, considering, and ultimately doing!
www.paybeb.com/mainsite/redcross


On a lighter note, and speaking of prayers…. Aunty and I are also praying that she gets discovered by Oprah or Ellen… or even the local TV Network. Once I mentioned “You could get called to Hollywood you know,” Aunty has gone wild with her wardrobe and the possibility of becoming a role model. She wants to buy a fur coat (I will get her a fake one and she will never know it). She is asking for more high-heels too. She wants to “be ready” if they call. She looked at me with a great big smile and said, “What if they only want me, and not you?”

Aunty is over the moon with the possibility of showing the world that you can be ageless under any and all circumstances. She is so delighted at the prospect that I just might have to call or write the big O and the big E and see if they would want to feature Aunty. With millions of caregivers out there and more people facing Alzheimer’s each year Ageless Aunty will help put a new spin on things. She is a breath of fresh air and offers real hope that even with such a cruel disease, you can live with dignity, some independence, and smoke a fake cigarette or two. Aunty still finds ways to help others, and reasons to laugh and dance. She makes it easy to remain devoted to her. Many say Aunty and I are a testimony to the miraculous power of love.

While Aunty is waiting to hear from the Networks, I will be sharing those stories I promised. My next post is going to be about how I demanded a role in a video from the MTV Network!!!! And, since Aunty absolutely loves sports cars, I may even write about trying to get Aunty to be Jay Leno's first guest when he goes back to his regular time slot. Now there's an idea! Seems to me, Prayers and Networking are a good route to take. Stay tuned…
Posted by Renee Gold at 9:04 AM