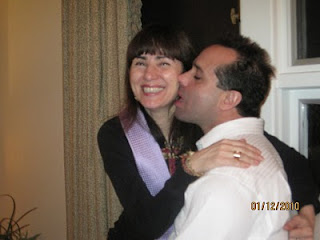 An Ageless Friend Acts Out...
His name is Michael Sinatra, well, that is today, and last week too when he wanted a good table at the restaurant. Yesterday he went by Michael Corleone (a la the Godfather)…. And this morning he was a producer for Moo-lah Productions. Any way you look at it he is a long time family friend who is always on. My entire family including Aunty has been enjoying his outlandish company for years. Everyone should have at least one friend like “Brother Michael.” Everything about him is over the top, and I feel larger-than-life in his company.

My so-called brother loves me. He likes to give me a big hug and kiss, all in the spirit of a good longtime friendship. In this particular picture he was pretending to be an actor in a passionate love scene. I was doing what I always do when he’s around …laughing.
What I appreciate about him is…
He loves much red wine and always brings you jugs full of joy…
He seasons all his food (and ours) with an Italian Liquor called Strega.
He spends three days making his signature risotto.
He works out every single day… and some nights too.
His cell phone, home phone, shoe phone, and head phones all play Strictly Sinatra.
He only gives compliments. Yesterday I was gorgeous, stunning, magnificent and a palace all in one.
His best friend is an old Italian barber named Santa.
He speaks a few languages, some he makes up, but they sound intriguing.
He is fascinated with the art of shoe shining.
He has been known to order everything on the menu.
He may walk out in the middle of dinner due to another engagement, but will kiss everyone at the table first, including the waiter….
He walk’s on my mother’s back when it hurts, sometimes in her high-heels.
He claims to have astral-traveled with Elvis. And he yearns to take everyone he meets to Italy. He is writing his memoirs in his sleep. Luckily he is an insomniac. He’s an all around (eccentric) friend who helps keep my family laughing and entertained. He’s the one supplying aunty with fake cigarettes and bootleg mozzarella. Look for him at a shoe, liquor, or party store near you! Friends like Michael (no matter what name they go by) help keep you ageless.

Ageless tip of the week: create an array of colorful friends…
Posted by Renee Gold at 9:10 AM