WE STILL LOVE YOU STEVIE 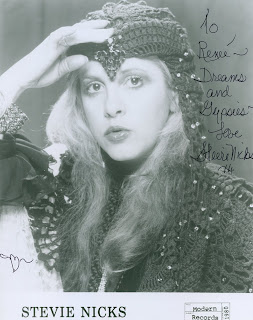 Stevie Nicks has been called the Queen of Rock and Roll. Back in the 70’s & 80’s I followed Stevie and her band Fleetwood Mac. My friends and I went to every concert they had within a fifty mile radius of my teenage bedroom. Stevie was the ultimate songbird. She was (and still is) a fantastic performer who possesses a unique and sultry voice. (Did you see her with Taylor Swift on this year's Grammys?) I have always appreciated her style, her image, and her mystique, as much as her singing. And I wasn’t alone. She had legions of followers…. We loved, and many still do, Love Stevie Nicks! I admired her even more when I learned that she would not give up believing in her talent, and refused to get a real job, even when her family put pressure on her to do so.

During Stevie’s solo reign my boyfriend’s brother treated me better than my boyfriend did. It was his brother who jumped up on stage when I won a local beauty pageant, and his brother who bought a hundred copies of the newspaper when I was a featured model. But I never thought it would be his brother who would bring me a signed picture from Miss Stevie Nicks herself just because I asked.

One day, after still gushing over a recent Stevie performance, I took all my mother’s exotic scarf’s and her tambourine (yes my mother was quite unique herself) and I danced in my room, carrying on as if I were Stevie Nicks. When the doorbell rang I stepped outside still dressed like Stevie and hung out with my boyfriend, and yes, his bro. My boyfriend’s brother, who was also into Stevie, told me he was going to meet our idol. I asked him to be sure and get me an autographed picture when he did. I believed he would. Here it is! I never got the full story, but I believe it has something to do with befriending her while they were both in rehab. What really matters is… I had envisioned an autographed picture of Stevie on my wall. I asked, I believed, and I received……

Ageless tip of the week….Ask, Believe, & be ready to Receive….
Posted by Renee Gold at 7:49 AM

Hey Renee! I was a Stevie fan too! Great seeing you at the Ashram today. I love your blog and am sharing with my Facebook friends. You and Auntie are great role models. So uplifting and inspiring! Love & hugs, Holly